News > The Rise of Biocatalysis in Continuous Flow Chemistry

The rise of biocatalysis in continuous flow

Flow chemistry is used in a variety of areas and can potentially improve a number of chemical processes. With the introduction of commercially available apparatus as well as the increase in academic literature and industry take-up, the use of these enabling technologies for research and development applications has expanded rapidly over the last 15 years.

Continuous Flow Biocatalysis is quickly gaining traction among chemists, with applications in the production of fine chemicals, drugs, biotherapeutics, and biofuels to name a few. This is reflected in the increased knowledge of these techniques in industry and academia, as well as the implementation of flow techniques in modern laboratories. The use of continuous flow biocatalysis has increased dramatically in recent years, as shown by the significant increase in publications. 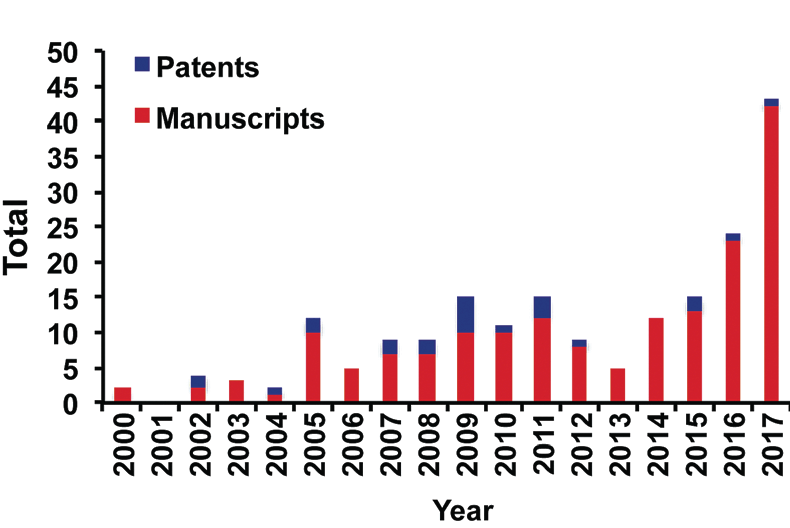 Batch stirred tank reactors are the most common method in conventional biocatalysis systems, and for good reason: they are the most commonly available reactor type. The collision of the enzyme with stirrers and impellers causes degradation and attrition of the enzyme in this process, which has low volumetric productivity. The use of free enzymes in batch reactions is limited by the biocatalyst’s ability to be recycled and recovered.

Flow chemistry has a lot to give and outperforms conventional approaches in many ways. Because of the improved mass transfer, the method can increase biotransformations speeds, making its use more cost-effective by reducing reaction times and increasing material throughput. Enzyme immobilization improves stability, decreases product purification, allows for better control of substrate contact time, and its recyclability lowers costs and expands their production applicability.

The transformation in whole-cell biocatalysis is dependent on the substrate entering and leaving the cell. There are two approaches to whole-cell catalysis: fermentation and biocatalysis, with the latter being of particular interest to chemists. Whole cell biocatalysis has the advantage of being less costly than purified proteins, but the downside is that the cell membrane restricts substrate and substance penetration, making the reaction slower than with purified proteins.

On the other hand, purified enzymes have the benefit of being very specific in their transformations, but this also means that enzymes are very specific for substrates. When using purified enzymes, the substrate must only diffuse through the protein’s active site, not through cell membrane. In addition, when compared with whole cells, the concentration of the desired enzyme is higher. However, the purification process can be costly, and purified proteins outside of the cell structure can be unstable.

While both forms of biocatalysis are used in continuous flow systems, the use of immobilized enzymes offers the greatest benefit.

There are a several methods for immobilising enzymes and ideally, they should show the same properties. Most have a number of them, including:

Entrapment, adsorption, covalence, affinity, cross-linking, and encapsulation are the most important immobilisation techniques, as seen below. Hydrophobic, salt bridge, van der Waals, and hydrogen bonding interactions between the protein or cell and the immobilization support are used to adsorb biocatalysts into solid supports (or carriers). Adsorption is easier to do and can prevent enzyme denaturation by inducing minimal distortion to the protein. However, compared to covalent immobilization, immobilization lifetimes and efficiencies can be lower.

The supporting material is functionalised with an active group (e.g., amine, epoxy, etc.) in the case of covalent binding (covalence),  and the enzymes are covalently bound to their surface. The most significant advantage of covalent immobilization is the possibility of increased catalyst lifespan due to reduced leaching.

See below a few of our favourites from the ever-growing list of publications on continuous flow biocatalysis:

Researchers from the Universidade Federal do Rio de Janeiro, Brazil have shown a fascinating solution to the bioreduction of β-ketoesters by immobilized microorganisms.

The researchers had previously demonstrated effective bioreduction of β-ketoesters in batch conditions using K. marxianus and Rhodotorula rubra cells, and now they’ve applied the same approach to continuous flow. Since microorganisms are immobilised by calcium alginate entrapment, these structures are more durable and quickly replicable and recycled, which is a major improvement over using entire cells, which cannot be recycled. By using this approach, the group were able to obtain β-hydroxyesters in excellent yields and high enantiomeric excess (>99%). Absolute stereochemistry could also be controlled by varying the β-ketoester structure and immobilised microorganism. 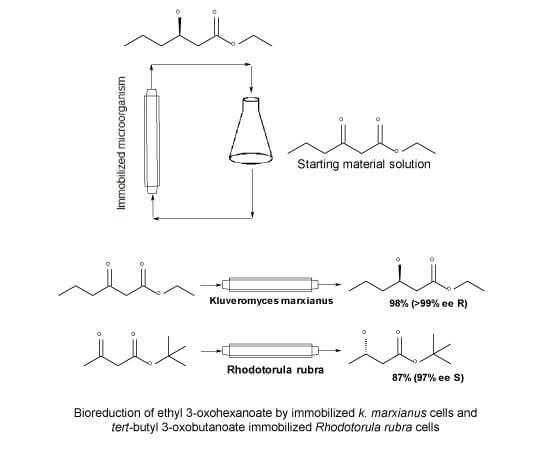 Researchers at the Department of Chemistry at the University of Cambridge, England, IBG-1: Biotechnology (Germany), and INB (Aachen University of Applied Sciences) have, in a three-step telescoped continuous process, established an enantioselective preparation of O-Acetylcyanohydrin. This is especially exciting since multistep biocatalytic approaches to chiral fine chemicals are still occasional.

Arabidopsis thaliana AtHNL and Candida Antarctica CalB were used in a robust continuous telescoped process that included in-situ HCN generation followed by aldehydes addition. A lot of stereocontrol were found in the hydrocyanation reaction. An in-line chemical acetylation allowed the stabilization of newly formed cyanohydrins and gave access to a class of O-acetylcyanohydrins with excellent conversions and ee values over the three steps (75–99% conversion; 40–98% ee).

This approached outperformed batch protocols in terms of reaction time (40 min vs. 345 min) and ease of use, allowing access to reactions that were previously neglected due to safety concerns. The modular components allow for precise control of two sequential biotransformations, safe handling of a hazardous gas in-situ, and product stabilisation in-line.

Synthesis of Geraniol esters for the food, flavour, and fragrance industries

Demands for flavours, perfumes and fragrances were expected to rise at a 3.9 percent annual pace, hitting $26.3 billion (USD) by 2020. On a commercial basis, the relevance of the synthesis of short-chain fatty acids, esters and aroma compounds is growing. Biocatalysis has seen a large increase in its adoption due to the increasing demand for green processes.

This example from the Department of Chemical Engineering (Institute of Chemical Technology, Mumbai)  demonstrates the synthesis of Geraniol esters used in the perfume, flavour, and drinks industries.

In this experiment, an immobilised Candida antarctica lipase B (Novozym 435) was used in a continuous-flow packed bed reactor. The effect of solvent, mole ratio, temperature and acyl donors on process parameters such as biocatalyst screening were studied. Using a 1:1 mol ratio of geraniol and propionic acid, a maximum conversion of ~87% of geranyl propionate was achieved in 15 minute residence time at 70 °C.  Among the biocatalysts tested, Novozym 435 was found to be the most active and stable.

It is a widespread myth that enzymes are unreliable and costly, that they only function at high concentrations, and that they are unsuitable for scalable chemical processing. However, many biotransformations are being carried out in a continuous manner, as they have a variety of chemical and biochemical solutions to improve the selectivity and yield of complex reactions.

If you are interested to know how you could implement continuous flow biocatalysis into your lab or is already using it and would like to improve your results, contact our Sales Team today.