Looking for a fast, accurate way to leak test your system? Whisper low pressure drop controllers provide a convenient, single instrument solution. A standard controller may also work, however stable leakages are best detected when the meter generates minimal pressure drop (line pressure due to frictional resistance). This makes the low pressure drop (as low as 0.07 PSID) of a Whisper quite useful, especially when leak testing smaller volumes such as valves or sensors.

A mass flow controller provided by Lab Unlimited simultaneously displays flow, pressure, and temperature readings and can control either flow or pressure.. While Providing accurate , real-time mass and volumetric flow readings, a single whisper controller is able to maintain a constant pressure at the device under test, this is displayed in the setup above. When the DUT is subjected to a constant pressure within the closed system, any resulting flow is a direct measure of the DUT’s leakage.

Historically, Lab Unlimited has provided two-unit leak testing systems using a standard mass flow meter and a remote sensing pressure controller. When plumbed as shown in the diagram, pressure is controlled at the inlet of the device under test (DUT). The needle bleed valve allows the pressure controller to hold pressure at the DUT. 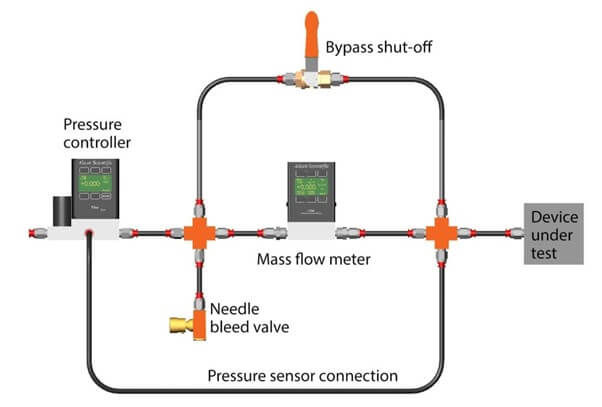 Note: This process may not be suitable for leak tests on larger volumes where the allowable leakage is near zero because minute temperature differences on large volumes can produce actual flows that are greater than the allowed leakage rate. This same problem of physics would also affect leak testing by pressure decay.