How Algae Sensors Work we gather up some of the interesting questions and address them here.

1) Have You Ever Tested the Sensors in Blackwater (High Dissolved Organic Carbon Concentrations)?

To make sure we're all on the same page, blackwater refers to water that contains so much dissolved organic carbon (DOC), especially chromophore dissolved organic matter (CDOM), that it appears darkly stained, like a very dark tea. This is not the same blackwater as the term is used in the wastewater industry, which refers essentially to raw sewage. Blackwater in the DOC-rich-environmental sense is not necessarily turbid, either. Some rivers appear black because they flow through very dark soils that become suspended in the water. The phrase "blackwater" does not cover that sort of particle blackening. Water can have a rich hue from dissolved organics while having very few particles (the cause of turbidity). 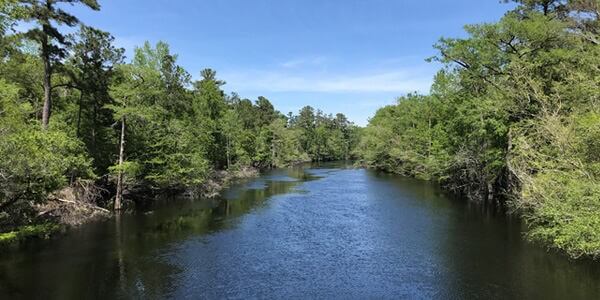 The simple answer is no, we have not performed a rigorous test of how the sensors perform in blackwater. Customers have reached us to report situations in which brightly coloured water looked to be a cause of interference. In those cases it further seemed that the chlorophyll channel was affected, rather than either the phycocyanin (PC) or the phycoerythrin (PE) channel.

There are several approaches that can be taken to assess the possibility of this type of interference. For example, one can collect water samples to assess them for DOC or CDOM via spectrophotometric or other laboratory analyses, while at the same time testing them with the TAL sensor and looking under the microscope for actual algae. Some users are evaluating whether our fDOM sensor, placed on the same sonde with the TAL sensor, might give them clues as to possible interference. Relationships among these different measurements (fDOM RFU vs. RFU on the chlorophyll channel) can help you to understand if this is a risk for your monitoring scenario and if so, how you might address it in post-processing of your data. 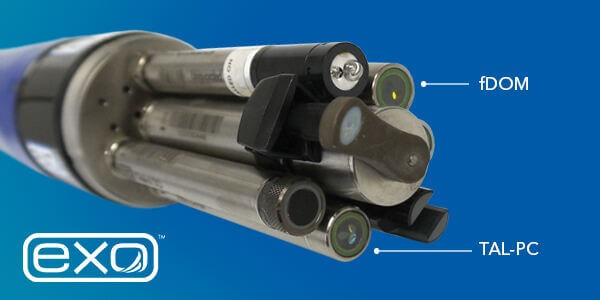 It's important to remember that the correlations established at one site, such as fDOM RFU vs. RFU on the chlorophyll channel, will most likely change from site to site.The composition of organics will determine any connection between TAL sensor output and fDOM, CDOM, TOC, DOC, and so on. Are they able to absorb the wavelengths of light that are either emitted by the TAL sensor’s LEDs, or that might be emitted by algal pigments before those emissions can reach the sensor’s detector? How consistent are they from season to season?

Excitation LED for the EXO chlorophyll channel is 470±15 nm, which is very close to the wavelengths used in CDOM analyses. Thus CDOM-rich waters could be absorbing light emitted by the chlorophyll LED. The question then becomes whether those absorbing compounds emit light in the algae sensor’s range of detection (685±20 nm). If they do, the outcome could be an erroneously high signal from the chlorophyll channel in CDOM-rich waters. If they don’t, the outcome could be an erroneously low detection, because the CDOM may rob the algae of some of the light their chlorophyll molecules would have absorbed. Of course, it could also be a wash—if there are enough algae around the CDOM interference might be negligible. This seems to be the case most often.

2) We See Higher Chlorophyll and Phycocyanin Values Near Reservoir Bottom Whenever Turbidity is Higher. Is This Turbidity Interference?

It would be simpler to respond if we knew how high “higher” is, as well as how high the turbidity is, but the lack of that knowledge allows us to consider all possibilities.  First, we can’t rule out that there are actually algae contributing to both the chlorophyll and the turbidity. We don’t know how deep the water is in this case but be reminded that there are benthic algae in many reservoirs, and further there are microalgae (like the cyanobacterium Microcystis aeruginosa) that migrate in the water column, presumably to avoid photobleaching by sticking around on the surface all day. Maybe there are algae in the area of the reservoir where these measurements are being taken? Is the pattern the same no matter the time of day or no matter where the TAL and turbidity sensors are reading?

Barring that, chlorophyll would not increase with higher turbidity, because turbidity more often would cause erroneously low values. Talking about turbidity interference, using a very simple graph to show how it is most likely to affect TAL sensor readings:

The particles that cause turbidity can deflect sensor-emitted light so that the light doesn’t reach the pigments, and the particles may also deflect light emitted by the pigments so that the light doesn’t reach the sensor’s photodetector. Thus, turbidity interference is usually observed at that point where the RFU reported by the sensor will be lower than one would expect based upon the concentration of pigments in the water, due to particles blocking incident or incoming light.

So this can rule out that actual algae are the source of the turbidity and chlorophyll signals, and doesn’t seem to see classical turbidity interference, how then could the more turbid part of a reservoir contribute to erroneously high on the TAL sensor? If the turbidity is during high fDOM, it is possible that the fDOM in that area of the reservoir is both excitable by the LEDs in the TAL sensor, and fluorescing in a wavelength range that is detectable by the TAL sensor. The higher turbidity is something of a red herring in this case; just because it’s higher doesn’t mean it has any effect whatsoever on what’s going on with the TAL sensor readings.

Thus, there are several possibilities in this case, even beyond what I’ve outlined here, that can give this listener some avenues to explore.

3) How Similar are the TAL Sensors to Pulse-Amplitude Modulated (PAM) Fluorometers for Measuring Photosynthesis Efficiency?

How the different channels’ LEDs are on at different times so that the TAL sensors could distinguish when the detector was being tweaked by one pigment versus another (since there is only one photodetector in the sensor that works with both channels). In this manner there may be a bit of similarity to PAM; there are different light sources on at different times, so that what is detected during those periods can be compared.  That seems to be where the similarity ends, though. The TAL sensors are using pigment-specific wavelengths of light, never use quenching light, and are not designed for any quantitative measurements of photosynthetic activity.

For readers seeking a more thorough answer we came to learn that PAM is a procedure often employed by botanists and occasionally by phycologists. Its ultimate purpose is to evaluate the quantum yield of photosynthesis—the proportion of photons that will be funnelled into the photochemistry of photosynthesis, rather than being lost as either heat or fluorescent light emitted by chlorophyll. This is achieved in essence by assessing the background fluorescence (F0) of dark-adapted cells and the maximal fluorescence they can emit (Fmax) when exposed to a saturating pulse of white light. Pulsing the cells with light that specifically activates Photosystem II (actinic light), where most photoconversion of light into biochemical energy takes place, teases out a momentary fluorescence yield that is somewhere between F0 and Fmax. That momentary fluorescence is indicative of the energy going through Photosystem II, and when corrected for background fluorescence and compared with Fmax one can calculate the effective quantum yield for the cells measured.

The TAL sensors are not very similar to PAM, nor should they be, since the two technologies (PAM and TAL sensors) are designed for completely different purposes. The quantification of photosynthetic quantum yield is quite different than trying to get a relative population size assessment using algal pigment abundance in the water.

If you want to learn more about PAM fluorometry we suggest starting with an oft-cited book chapter that explains the underlying principles, which still are relevant for modern instruments (Ulrich Schreiber, 2004, in Chlorophyll a Fluorescence: A Signature of Photosynthesis, pp. 279-319, eds. Papageorgiou and Govindjee, Springer). There is also a nice paper by Ogawa et al. that talks about the challenges and options for using PAM for estimating photosynthesis in cyanobacteria (Photosynth. Res., 2017, 133:63-73). Finally, the German company Walz, one of the main manufacturers of PAM technologies, has an excellent page of “PAM Application Notes” in addition to their latest “diving” PAM fluorometer. 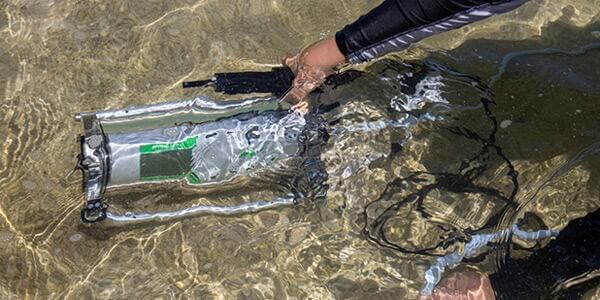 4) Can I Correlate my 600OMS PC Sensor to My Newer EXO PC Sensor? My Client is More Familiar with the Older (Larger) PC Values; Whereas the EXO Has Very Low Values (Decimals).

6-series users may notice differences in the readings they get with our old BGA-PC sensors versus the updated EXO TAL sensors. The 6-series and EXO sensors are fundamentally different technologies with respect to materials, components, construction, and very importantly, firmware. The Table below highlights some of the key differences when measuring PC with 6-series and EXO sensors, and which are the result of these technological differences.

In spite of the inherent improvements in the EXO platform relative to the 6-series, scientists (including this listener’s client) can find it unsettling when there are subtle differences in how their data look when transitioning from one technology to another.

In 2018 we chose to address this issue by giving customers two new options in KorEXO software, within the calibration menus for the TAL sensors. First, many customers longed for the days of a cells/mL output on the PC channel, so they now have the freedom to build their own correlations between sensor RFU and cells/mL, so that the sonde can deliver cells/mL as an output for the PC channel. Second, at the same time we built in a data conversion that can make your EXO outputs look like 6-series PC outputs. The screen capture below shows this module from the software, where the “legacy” radio button is referring to an EXO-to-6-series data transformation, and line is just a goofy attempt to show how you can enter numbers into the correlation module: 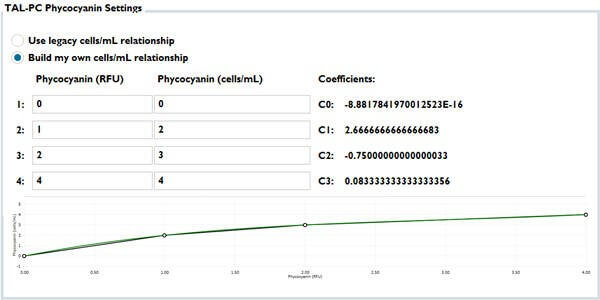 This module allowed us at YSI to continue to strive for better practices in the industry, by which I mean continuing to encourage people to use RFU units and to treat in situ algae sensors as a monitoring tool, not as a laboratory-based analysis.

Looking to Find Out More?

For more information on algae sensors, contact Our Team Today! They would be happy to help with any questions you may have.