Gasification is a process in which biomass or fossil fuel is converted into carbon monoxide, hydrogen, and carbon dioxide (syngas or synthetic gas).1 As a result of higher combustion temperatures, the syngas created is more energy dense than organic fuel in its combustion, according to the theorem of thermodynamic efficiency by Carnot. Due to this, direct use of syngas is made possible for gas engines, kilns, boilers and thermal oxidizers. In some parts of the world, syngas made from biomass is thought to be less expensive than fossil fuel and can be directly substituted in most applications. Furthermore, the quality of the syngas produced depends on the composition of the reaction, which ultimately relies on precise control of oxygen or air entering the gasification chamber.

Hazardous waste, Medical waste Municipal solid waste and feedstock of biomass is where Syngas can be produced. While the amount of pollution created depends upon the feedstock, syngas burns cleaner than fossil fuels and has much lower emissions than greenhouse gases.

Syngas is typically created from three major components: carbon, oxygen, and steam. The carbon and steam are created by heating the fuel, and the oxygen is added exogenously. The oxygen introduced will interact with the steam and carbon to ultimately create a mixture of hydrogen, carbon monoxide, and carbon dioxide. The particular composition of the syngas is dependent primarily on the amount of oxygen added to the system. Too much added oxygen will result in a higher concentration of carbon dioxide, and a correspondingly lower concentration of carbon monoxide. Such a mixture lowers the overall quality of the syngas and limits its applications. Lab unlimited provided mass flow instrumentation can streamline and provide additional efficiency and safety in gasification and syngas product processes. 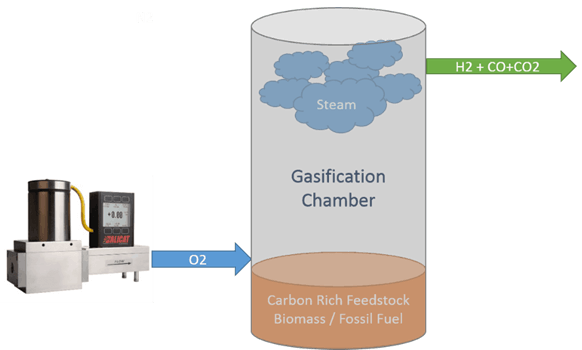 A large flow rate is commonly required as a result of the large size of the majority of gasification chambers. In order to achieve the accuracy required and the high flow rates needed to produces syngas with an optimal composition, a large mass flow controller may be used for the most precision. Lab unlimited’s MCR-Series controllers use near-frictionless Rolamite proportional control valves to rapidly and precisely control flow rates up to 5000 SLPM. With an accuracy of ±(0.8% of reading + 0.2% of full scale range) extending to these high flow rates, precise composition can be ensured.

As a result of unforeseen variations in the feedstock or experimental setup, occasionally the concentration of syngas components is not as intended, even though the flow rate of oxygen can be controlled. A straightforward quality control check may be completed in order to contest this issue. Instead of carrying out a long-winded full system restart, propane may be added to the mixture via the use of a mass flow controller to counteract the possibility of a larger percentage of CO2 than what is desirable in order to ensure quality of the syngas. This new mixture will more closely match the chemical properties of the desired composition and can be used in most applications. This compensation can be done easily via serial communication with the controller and integrated into an existing quality check program. 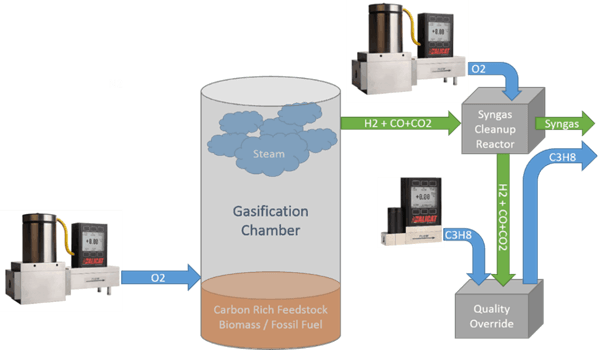 Unwanted tar particulates may be removed via the use of a clean-up reactor after the syngas has been created. Cyclonic separation is commonly what is used to remove particulates. In a cyclone separator with secondary input, oxygen is sprayed through nozzles to create a vortex. The particulates will be unable to follow the tight curve of the vortex due to the increased inertia caused by their larger density.2 A high accuracy mass flow controller can ensure that particulates of the right density are separated efficiently by tightly controlling the oxygen flow. The syngas can be further cleaned with oil or water scrubbing to remove residual tar. 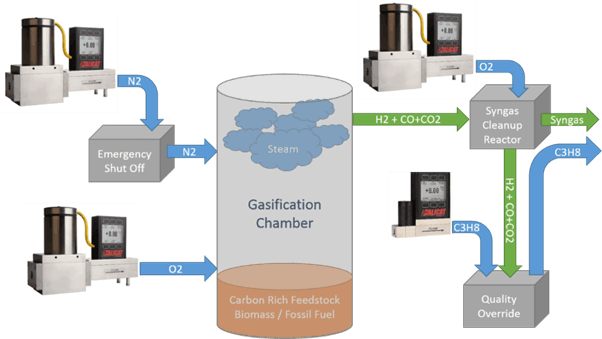 When working at such high temperatures with potentially combustible materials, purging the system quickly is sometimes necessary. A safety shut off system can easily be configured with a mass flow controller to flood the chamber with nitrogen. These controllers can be built with a CSA Class 1, Division 2 (ATEX zone 2) area classification to ensure that local fire safety regulations are being met and the mass flow controller is suitable for the operating environment.

The way in which this Syngas is created means that it may be used in a multitude of ways, such as for transportation fuels, for Hydrogen fuel cells and and power generation. A common secondary product from this process is “biochar”. Biochar properties can be successfully predicted utilizing the van-Krevelen diagram.3  Due to it’s utility as a carbon source, porous nature and inherent water retention as a result of its hydroscopic features, Biochar is highly useful in soil amendment. Instead of biochar, gasification will create liquid stone and metal when operation at higher temperatures. These resulting products can be used as construction materials or high density filler and have been proven to be non-leaching.4

Lab unlimited provided mass flow controllers can be used in multiple areas of the gasification process: combustion, cleanup reactors, safety, and quality control. The precision and versatility of these units allows for more precise syngas production, redundancy between units, and extremely fast control. After all, the quality of the syngas produced is dependent upon accurate and repeatable flow of oxygen into the gasification chamber.